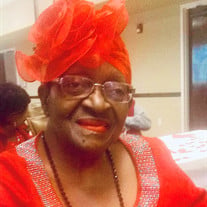 The Life of Mrs. Vi Mrs. Viola Jennell Stafford was born on September 9, 1937 to the late Deacon Willie Lee and Ruby Reeves Bostic of Laurens County, GA. At an early age, she accepted Jesus Christ as her personal Lord and Saviour and was baptized at New Providence Baptist Church under the leadership of the late Rev. J.R. Carroll. After relocating to Brunswick, GA, the youngest of six children, she graduated from Risley High School in 1956. As a member of the infamous Risley High School Marching Band, she was a Head Majorette. She was also an outstanding dancer in the modern dance group at Risley High School. After high school, she furthered her studies in Business at Fisk University in Nashville, TN. On January 2, 1960, she married William T. Stafford of Brunswick, GA. Four children were born to this union. She relocated to Fort Worth, Texas in 1963 to join her husband who was in the Air Force and stationed at Carswell AFB eventually settling in the great community of Como (Lake Como, TX). Although she assisted her husband in his entrepreneurial endeavors of a local record shop/pool hall called "Stacks Play Room" as a bookkeeper, sales associate, etc., her primary focus was caring for her husband and children. While taking great care of her family, she continued her education and received an Associates Degree in Applied Science Secretarial Careers-General from Tarrant County College-South Campus where she made the Dean's List each semester she attended. She was also initiated into "Phi Theta Kappa" National Honor Fraternity of the Community and Junior College. On January 9, 1966, under the leadership of the late Rev. H.D. Steptoe, she united with Como First Missionary Baptist Church where she served faithfully until her illness. She served and provided leadership in many areas of the church including: Teacher for the Young People's Class, Teacher for the YWA Girls, Vice-President of the Matrons, Sunday School Teacher for the Intermediate Girls, Member of the R. Houston Mission Circle, Member of Usher Board #1, Directress of Usher Board #1, 2nd Vice-President of the Total Women Missionary Society (WMU), Served on the Teaching Staff of the WMU (Women Missionary Union), Served as Bible Instructor for the entire Usher Board, Selected as one of the "Eminent Women" for Outstanding Leadership by the WMU in 1989, and was honored by the McMillan Young Adults & African Clergy Women as a "Mother Who Models God's Plan for Parenthood" in 1994. Over her years of service at Como First Baptist, affectionally known as "Mrs. Vi" or Mrs. Stafford, she touched dozens of young girls' lives - including her own daughter - with practical life examples based on Biblical principles when dealing with problems and peer pressures that many young people encountered. She promoted positive self-esteem and good Christian values to young women of Como and stressed the importance of living in such a way that our Lord and Saviour Jesus Christ would be proud to call us his daughters. Throughout the years, many of her mentees thanked her for her wisdom, insight, and Christ-like examples in helping them to make the right decisions in their journey of life. Her favorite scripture was Jude 1:24-25 which states "Now unto him that is able to keep you from falling and to present you faultless before the presence of this glory with exceeding joy, to the only wise God our Saviour, be Glory and Majesty, Dominion and Power, both now and ever. Amen". Her favorite book in the bible was Acts and her favorite biblical character was Paul and all his missionary journeys. Viola Jennell Stafford passed away peacefully on July 2, 2021 after a long illness with multiple sclerosis. She was a loving and devoted wife, mother, grandmother, great-grandmother, aunt, sister, and friend. She was preceded in death by both parents, husband William T. (TX) of 47 years, brothers Tommy Lee Bostic (GA), Robert L. Bostic (CA), sisters Laura Mae Bostic-Harrington (FL) and Pearlie Mae Davis (GA) and her children: Daughter, Phyllis Lorraine Stafford, and Sons: William Maurice Stafford, and Gregory Eugene Stafford, Fort Worth, TX. She leaves to cherish her memories: Her loving and devoted son, Reginald Derrick Stafford, Sr. Brother, Willie Lee Bostic (Compton, CA); Half-Brother, Roy Bostic (Eastman, GA); Aunt, Ethel "Friday" Thomas (Eastman, GA); Grandchildren, Reginald Derrick Stafford, II (Corlinda), William Maurice Stafford-Fennell; Great-Grandchildren, Jacorian Wun Stafford, Reginald Derrick Stafford, III, Raegan Devon Stafford, and Ryan Daniel Stafford plus a host of cousins, nieces, nephews, other relatives, and friends all over the country.

The Life of Mrs. Vi Mrs. Viola Jennell Stafford was born on September 9, 1937 to the late Deacon Willie Lee and Ruby Reeves Bostic of Laurens County, GA. At an early age, she accepted Jesus Christ as her personal... View Obituary & Service Information

The family of Mrs. Viola J. Stafford created this Life Tributes page to make it easy to share your memories.

The Life of Mrs. Vi

Send flowers to the Stafford family.