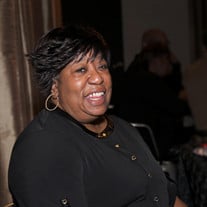 Sandra Joyce Green, 72, passed away on Wednesday, September 1, 2021 at her home in Fort Worth, Texas, Born in Fort Worth, Texas on January 11, 1949 to Mr. Albert Hawkins, Jr. and Mrs. Myrtle Lee Price Hawkins, Sandra was the first of four children born to this union. Being raised in a Christian home, she confessed her faith in God and in our Lord and Savior Jesus Christ at an early age and was baptized as a youth. Sandra (also called Sand by family and friends) attended Fort Worth Public Schools as a young child-James E. Guinn Elementary and Morningside Jr. High. During her youth, she was an active member of Jack & Jill, Inc. and of St. Andrews United Methodist Church where she also was a frequent soloist (soprano) with the Youth Choir. She attended I.M. Terrell High School where she achieved academically and participated in various extracurricular activities including Chorus, Honor Society and R.O.T.C. In 1967, Sandra was an Honor graduate of I.M. Terrell High. Sandra knew how fortunate she was to have formed so many lifelong friendships as a young girl and truly valued those relationships. She went on to further her education, first at North Texas State University (now UNT) and subsequently at The University of Texas at Arlington (UTA). With the support of her proud parents, Sandra was honored to be presented as a Debutante in 1968 by The Assembly. While at UTA, she was initiated as a member of Alpha Kappa Alpha Sorority, Inc. She was awarded a Bachelor's of Arts in Sociology from UTA in 1971. Sandra and Paul Stephen Davis were married on June 24, 1972. To this union twin boys were born-Stuart and Stephen Davis. In 1975, Sandra began her 25-year career with Tarrant County Juvenile Probation Department. She officially retired on January 31, 2000 but when talking about her work, it was clear that she had the highest esteem for her colleagues and associates. On December 23, 2008, Sandra and Roger L. Green were united in matrimony. Roger has been a loving, caring and supportive companion who brought her great happiness. Sandra was preceded in death by her parents, and is survived by her beloved husband Roger Green; sons Stuart (Sophornia) Davis and Stephen Davis; daughter-in-law Chunna Davis; step-daughters Tawayna (Cubie) and Courtney; siblings Anita Hawkins Freeman, Albert Hawkins III (Jacquelyn) and Mary S. Hawkins, grandchildren Haley Homer, Paige Davis, Geraud Williams and Lincoln Richard; great granddaughter Nyla Richard and other relatives and friends.

Sandra Joyce Green, 72, passed away on Wednesday, September 1, 2021 at her home in Fort Worth, Texas, Born in Fort Worth, Texas on January 11, 1949 to Mr. Albert Hawkins, Jr. and Mrs. Myrtle Lee Price Hawkins, Sandra was the first of four... View Obituary & Service Information

The family of Mrs. Sandra Joyce Davis-Green created this Life Tributes page to make it easy to share your memories.

Send flowers to the Davis-Green family.