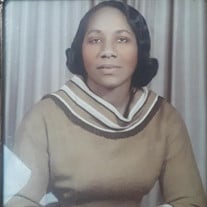 Remembering the Life of Roxie Larine Reeves, 86, of Palestine, Texas. She went home to be with her Lord and Savior Jesus Christ on Sunday, December 9th, at her residence surrounded by family. She was born October 28, 1932 in Tucker, Texas, the precious daughter of the late Thomas (Jimmie) and Virgielean Reeves. Roxie (affectionately called “Fat”) was the youngest of five children. Roxie accepted Christ, was saved and filled with the Holy Ghost at an early age under the leadership of the late Elder Alvin Reeves of Tucker Church of God In Christ. When she became an adult, she was one of the original members of Friendly Temple Church of God in Christ. She was the first pianist at the church and was very faithful. She enjoyed singing in church. She was often heard singing “I’m A Soldier In the Army of the Lord”. If you ever needed someone to do a welcome for a church service, Roxie was the one to call. She was superb in her ability to put the right words together for a wonderful welcome. In her latter years, she made sure that her oldest sister, Miriam L. Williams attended church with her regularly. She would drive to pick her up each Sunday. Roxie has always had a servant’s heart. It was not unusal to find her cleaning and picking up after everyone on any given day. Roxie spent her early years in Palestine where she attended and graduated from Green Bay High School. Roxie attended Hurd Cosmetology School and earned her license in Cosmetology. After graduating, she moved to Ft. Worth, Texas and worked at a Beauty Salon on Pennsylvania Avenue for 30 years. After retiring from Cosmetology, she began working at the Ft. Worth State School as a supervisor over Challenged Adult residents. On her own time, she would volunteer to use her cosmetology skills on the residents. She left this job to return to Palestine to care for her Mother and Father, who were declining in health. She was preceded in death by her Mother and Father, two Sisters Miriam L. Williams, L.V. Williams a Brother Willis T. Reeves Sr. and a Nephew Rufus C. Williams Jr. She is survived by one Brother: Alex L. (Veneta) Reeves Sr of Los Angles, California. One Brother in law: R.C. Williams. Nephews: Lawrence Williams, Willis T. (Vera) Reeves Jr, Gregory T. (Deborah) Reeves, Alex L Reeves Jr., Shelvin C. (Monica) Williams and nieces: Linda Bell, Brenda Howard, Reatha Baker, Miriam Brownlee, Renita Reeves, Vanessa Hastings, Deborah (Donnie) Hamilton, and a host of great nephews and nieces. Expressions of sympathy may be made to the Friendly Temple Church of God in Christ Benevolence Fund, 1745 East Davis Ave, Ft Worth, Texas 76104. Arrangements are under the direction of T and J Family Funeral Home, 1856 Norwood Plaza, Hurst, Texas 76054.

Remembering the Life of Roxie Larine Reeves, 86, of Palestine, Texas. She went home to be with her Lord and Savior Jesus Christ on Sunday, December 9th, at her residence surrounded by family. She was born October 28, 1932 in Tucker, Texas,... View Obituary & Service Information

The family of Ms. Roxie Larine Reeves created this Life Tributes page to make it easy to share your memories.

Remembering the Life of Roxie Larine Reeves, 86, of Palestine,...

Send flowers to the Reeves family.