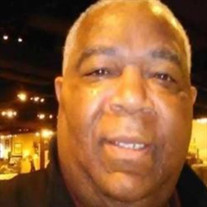 In a small town of Altus, Oklahoma on March 2, 1960, Ray Anthony Conway, was born to William Edward and Alma Mae Conway. He was the fourth child out of seven siblings. Ray had a smile that would melt your heart and a love of family that would last a lifetime. If you said the one name, Kourtney, his smile was as big as a football stadium. This was his pride and joy, his daughter. He attended school Altus High School where he was an avid football player. His journey as a defensive line football player in high school would earn him a scholarship at East Central University. He won several awards during his football career like the OIC Champion and he wore that ring with pride. During his tenure at college he would gain the admiration of his team and his teammates became his lifelong friends. He moved to Chicago where he was selected to try out for the Dallas Cowboys but on the day of tryouts, he pulled a hamstring and could not fulfill that role. He loved security and worked for R. Kelley and his last job was with a faithful security guard at Smith Security even while being sick. Ray was a person who had visions of being successful that reached to being a publisher. Ray’s second vision -- publishing a book and then turning it into a movie began to unfold when he began to write “Hustle and Flow Part II” which was later changed to “Grind and Flow Part II.” He was very adamant about it because he wanted to take care of his family – write and publish the book, turn it into a movie, and make a fortune so his family would reap the benefits. He completed the book and is now in the publisher’s hand. Even in sickness he requested his manuscript to be brought to the hospital because nothing was going to stop him from obtaining his dream. Ray’s love of his family was undeniable. He loved to entertain his family by telling jokes, he was someone you could talk to, gave good advice to his siblings, nieces and nephews, and tried to fix your problem and if he couldn’t he would find a way. Ray praised God in sickness and his God experience was very emotional upon awakening from his illness. God reached down and took his hand for the final time on June 13, 2020. He leaves to cherish his memories one daughter, Courtney Conway of Snellville, Georgia; five sisters – Dian Johnson and Pamela Conway of Fort Worth, TX; Mureline Young (Hubert) of Altus, OK; Elaine Bolding and Jennie Martin of Columbus, OH and four brothers -- Michael Lindsey of Virginia, Gerard Lindsey (Crystal) of Crowley, TX, Courtney Conway of Bradenton, Florida and Whitney Conway (Ebony) of New York, New York, nieces, nephews and a host of family and friend.

In a small town of Altus, Oklahoma on March 2, 1960, Ray Anthony Conway, was born to William Edward and Alma Mae Conway. He was the fourth child out of seven siblings. Ray had a smile that would melt your heart and a love of family that would... View Obituary & Service Information

The family of Mr. Ray Anthony Conway created this Life Tributes page to make it easy to share your memories.

Send flowers to the Conway family.