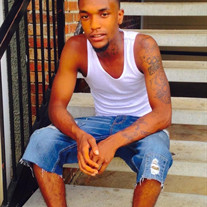 Quiton De'Sean Murray was born in Fort Worth, Texas on January 27, 1996 to Laquita Murray and Adrain Jones. He was the 3rd of 5 boys. He was the 3rd of 5 boys for Laquita and the 2nd oldest child for Adrain. Quiton's grandparents had a helping hand in raising him along with his mother. He had the type of personality that grow on you and made you fall in love with him. Quiton was just a young man when he started playing basketball at home with his brothers and childhood friends. He received his education at S.S. Dillow Elementary School, Williams James Middle School and Dunbar High School. During that time he grew very popular in the sports world, known as one of the twins even though he wasn't a twin. Quiton was help employed and very independent since the age of 16 and he helped those that were close to him. Quiton was proceeded in death by his grandmother, Laverne Suleman and his grandfather Bobby Murray. Those left to cherish his memories, his parents, Laquita Jones and Adrain (Terrolyn) Murray; his fiance, Erin; son, Zaire; grandmother, Sevella; brothers, Damond, Jaleel, Deon, Tyrece, Caleb, and Devante; sisters, Curtisha and Tearolyn; uncle, Reginald; Aunts, Koda, Sharonda (Todd), Deborah (Fred), Barbette, Keneisha (Derrick); 6 nephews, 3 nieces; and a host of other relatives and friends.

The family of Mr. Quiton De'Sean Murray created this Life Tributes page to make it easy to share your memories.

Quiton De&#39;Sean Murray was born in Fort Worth, Texas on January...

Send flowers to the Murray family.