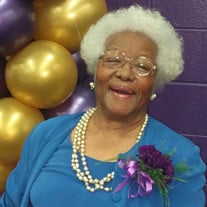 On November 24, 1930, we were all blessed with the presence of a beautiful baby girl, Pauline Yvonne Brooks, “Granny”, who came into this world on the Loomis Salome Farm, in the small town of Haskell, Oklahoma, and was called home to be with the Lord on March 22, 2021. She was 90 years old. Pauline was the 16th of 17 siblings. At the age of 7, with the passing of her father, the family moved to the Jim Johnson Farm, which was closer to the schools and town. She accepted Christ at an early age, and praised and served Christ until the moment she died. She was taught by her high school principal, Mr. Ed Tucker, at Booker T. Washington where she was regarded as being an exceptional student. After graduating from high school, she found work in Tulsa, Oklahoma and Kanas City, Missouri. It was in Kansas City that she met Samuel Houston Williams, Jr. and to this union, her only child, Steven Eugene Williams Walker was born. Seeking more gainful employment, Pauline and Steven moved to Fort Worth, Texas. Shortly after arriving, she began attending Strangers Rest Missionary Baptist Church, pastored by the late R.W. West, but when her brother, Reverend Jackson L. Moore became an associate minister of Pleasant Mount Gilead Missionary Baptist Church, under Pastor Jerry L. Lenley, she joined there, and remained a member after the passing of Rev. Lenley, through the installation of Robert L. Sanders, then Reverend Larry J. Mouton, Jr., and lastly Pastor Kevin L. Pullam who currently serves as the church’s pastor. She is survived by her son (her “Golden Boy”), Steven E. Walker and his wife Emma, her grandchildren, Steven O. Walker and his wife Tamesha, Dionne Moten and her husband Zachary, and her great-grandchildren, London Victoria, Mia Juliana and Dylan Maxwell. In addition to being a mother, grandmother, and great-grandmother, she was a wife, a daughter, a sister, an aunt, and a beloved friend to so many people. Her life was one of service. She loved serving and being a blessing to others. She served in her church as a Deaconess, and as lead coordinator of the hospitality committee. She sang in the senior choir and was a Sunday school teacher for over twenty years at her home church. She worked for the Fort Worth ISD system, in the school cafeteria, where she served the children shortly after leaving her position as a housekeeper where she helped to raise and care for the children of her employer. She did all of this as a single mother, until meeting the love of her life, Thurston L. Brooks. They were married in 1973 and lived a beautiful life together until his passing in the late 80s. She was an aunt to over 30 nieces and nephews, who she loved and enjoyed spending her time with, and they all loved their “Aunt Polly”. She was loved and admired by her friends, her neighbors and church members. If she wasn’t having someone over for dinner, she was always cooking something to take to someone to eat. She prayed for so many people, and so many people in turn, prayed for her. She was sassy, but kind, strong-willed (bossy), but thoughtful, and seemed to have an answer for everything. So many people of all ages, and all walks of life called to talk to her all the time – for advice, for words of encouragement, for a listening ear, for prayer and sometimes for just a good laugh. Even though her memory began to fail her the final days of her life, she never forgot the Word, and she never forgot to pray. Her life is one that we will always remember, admire and truly miss. We love you Granny, Aunt Polly, Sis. Brooks, Mrs. Brooks, friend.

On November 24, 1930, we were all blessed with the presence of a beautiful baby girl, Pauline Yvonne Brooks, &#8220;Granny&#8221;, who came into this world on the Loomis Salome Farm, in the small town of Haskell, Oklahoma, and was called home... View Obituary & Service Information

The family of Ms. Pauline Yvonne Brooks created this Life Tributes page to make it easy to share your memories.

Send flowers to the Brooks family.