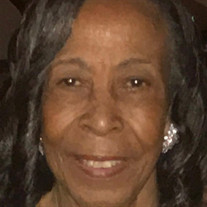 Nannie Morgan was born in July 1, 1936 to the late Sylvanus and Bertie Tucker in Buckingham County Warminster, Virginia. Nannie’s family relocated to Long Island, New York and she attended school in Glen Cove, New York. As a young girl she joined the Church of God and Christ where she was baptized by Elder Pettus. She met Billie F. Morgan, who was in the navy. They married and moved to Corpus Christi, Texas where he was stationed. She later moved back to Glen Cove, New York. Nannie worked at W. T. Grant Department store where she was one of the first African American to be hired and was a sales clerk there for five years until she moved to the Bronx, New York for better opportunities. When she moved to the Bronx, New York, she was able to acquire a position at Fordham hospital in the purchasing department as a senior clerk. Nannie attended Unity Baptist church in New York under the leadership of the late Rev. Alex Kennedy and thereafter Rev. Helen Ruth McCoy. Nannie raised funds for the church, by giving a cruise and started a program to raise money for the church. She remained loyal to Unity Baptist church by traveling New York frequently to attend the anniversary of the birthday celebration fund raising program she started. She loved Unity Baptist church. After leaving Fordham hospital she worked for the Senator Israel Ruiz two years as a clerk. She was at the forefront in the movement of effort to teach people about the importance of voting and she would assist in campaigning by marching, protesting and going door to door to help people understand the significance of their ballot. Nannie was elected to serve on the board of many high-profile jury cases in the state of New York. Nannie was hired at the prestigious Columbia Presbyterian hospital in Manhattan, New York as a patient representative. She worked there until she retired. After she retired, she moved to Keller, Texas. While looking for a church home she attended several churches. One day she was listening to her radio and she heard Bishop Kenneth B. Spears message and she enjoyed the message. Nannie was very persistent to hear the message in person, so she went to First Saint John Cathedral church to hear the Honorable Kenneth B. Spears in person. She would always express how she had grown so much spiritually through his teaching. Nannie joined the aftercare ministry and she served members who were sick, she visits nursing homes and made phone calls to those who were ill, or just need an uplifting person to talk to. Nannie loved being a member of the First Saint John Cathedral Church, and loved her Bishop the Honorable Kenneth B. Spears, her After-Care Ministry, and the Members. She would often emphatically state “First Saint John Cathedral is my family and I am so glad I found a such a loving and caring church family at First Saint John’s Cathedral”. Nannie was a loving and caring person who touched the lives of so many people. She believed in helping others and did her all to keep the family together, provide them with her wisdom, spiritual guidance and support so that they may have a happy life. Those who remain to cherish her memory are her two children whom she loved dearly, Billie and Cynthia, her two grand-children Brannon and Devin, and one grandson in law Chris, and four great grand-children

The family of Ms. Nannie Morgan created this Life Tributes page to make it easy to share your memories.

Send flowers to the Morgan family.