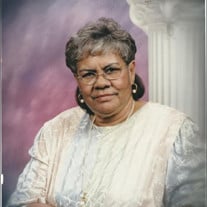 Mary Lucille Adams Timley was born March 27, 1934 in Fort Worth, Texas and was the only child of Charles Lee and Pauline Ricketts Adams. She was raised by her step-father Herbert Pollard. She was educated in the Fort Worth and San Angelo Public School Districts and graduated from I. M. Terrell High School in 1953. She professed a belief in Christ at a young age and was united with the Cowan-McMillan United Methodist Church where she served as Sunday School secretary. When Cowan later merged with Eastwood United Methodist Church, she remained a member until her death. A gifted and talented seamstress, she worked at the Salty’s Apparel Company in Fort Worth until its closure. She later worked for Tandy Corporation and General Dynamics. As a youth, she discovered that she possessed several artistic abilities. One of these was drawing. She once sketched an exact replica of John F. Kennedy’s face. She made Christmas ornaments out of sewing thread and decorative foil, poodles out of wire coat hangers and plastic bags and earrings out of fabric. A superb baker, her signature dishes included key lime pie, Italian cream cake, peanut brittle and doughnuts. She spent a lot of her childhood with cousins Betty Ricketts Harris and John (Brother) and Luther Ricketts. She and Betty are still like sisters. Never one to bite her tongue, she would always tell you the truth. If you didn’t want to hear it, don’t ask her. She loved watching pastors T. D. Jakes, Joel Osteen and Jimmy Swaggart and listening to old spiritual, jazz and blues singers. She also loved working puzzles, and she worked in her yard until her health no longer allowed it. Her favorite scriptures were Psalm 23 and the Lord’s Prayer. She leaves to cherish her memory her children: Wanda Tartt, Cassandra Timley, Deadra Timley Taylor (Charles), and Paul Timley (Shamica), grandchildren Tichaun Williams (Jason) and Kashari Jeffers (Kyle), great-grandchildren Alana and Bellamy Williams, Majesty and Malaysia Jeffers, close cousin and sister Betty Harris, godchildren Charles, Mary and Jeremy Holiday, special friends Meneeta Joyce Washington and Larry and Paula Donaldson and several cousins and friends.

Mary Lucille Adams Timley was born March 27, 1934 in Fort Worth, Texas and was the only child of Charles Lee and Pauline Ricketts Adams. She was raised by her step-father Herbert Pollard. She was educated in the Fort Worth and San Angelo... View Obituary & Service Information

The family of Ms. Mary Lucille Timley created this Life Tributes page to make it easy to share your memories.

Send flowers to the Timley family.