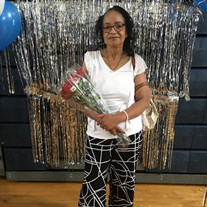 Manuela Gloria Perez, “Tuty,” was born November 8, 1947 in Colon, Panama to the union of Eloy and Gabina Perez. Manuela married her longtime friend and love that she had known since the age of 14, Willard Cecil Roberts in July of 1969. They were blessed with the union of two beautiful children, Willard Jr., and Derrick. They both decided to raise their children in Fort Worth, Texas by way of Brooklyn, New York. Manuela was a woman of principal and strong character. Anyone who knew her would attest to the fact that she had an undeniable love for her family and would do anything to ensure their safety and happiness. Manuela was an extremely loyal woman, regardless of how much time had passed she never forgot those who touched her heart. Once Manuela opened her heart to you, it was an open door forever. The highlight of her life was making her family and friends happy by warming their pallet with a nice cooked meal. Her Pot Roast was legendary and her arroz con pollo would have you begging for seconds. Manuela was the epitome of a wife, mother, daughter, sister and friend - She enjoyed life by spending time with her grandchildren, talking on the phone with her distant nieces, nephews and siblings and the many family trips together. For many years Manuela worked as a social worker at Cooks Children’s Medical Center, where she retired. Manuela was a True Beauty and Christian woman who loved and was beloved by her family and friends. Her grandchildren called her “Grandma,” she would always feed them with love and laughter, most important and paramount was their Spiritual well being. On Friday August 9, 2019 God looked in his garden and called his daughter Manuela Gloria Roberts – “Tuty” home. She was preceded in death by her parents Elroy and Gabina Perez and siblings Berta Haley, Miguel Angel Zarate, Pedro Perez, and Gabino Perez. Her love and memory will remain in the heart of her beloved husband of 50 years, Willard Roberts Sr.; children, Willard Roberts Jr. (Sonja), Derrick Roberts (Chianti); siblings, America Mick, Sylvia Pasely, Delia Perez; grandchildren, Alon Roberts, Draylon Roberts, Amari Roberts, Kobe Roberts and Brooklyn Roberts.

Manuela Gloria Perez, &#8220;Tuty,&#8221; was born November 8, 1947 in Colon, Panama to the union of Eloy and Gabina Perez. Manuela married her longtime friend and love that she had known since the age of 14, Willard Cecil Roberts in July of... View Obituary & Service Information

The family of Mrs. Manuela Gloria Roberts created this Life Tributes page to make it easy to share your memories.

Send flowers to the Roberts family.