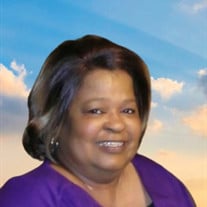 Louise “Sissy/Blu" Williams was a caring and deeply loved mom, sister, grandmother, great grandmother, and friend. After courageous battle for years with her heart she left this world on May 18, 2021 at the spectacular age of 70. She was born to Mattie Mae Boone and Walter Lee Boone Sr. on December 29, 1950 in Paris Texas. In her youth she was an active member of Olive Branch Baptist church. Her early childhood education was at T.G. Givens and she later attended Gibbons High School. In 1967, her family moved to Fort Worth, Texas and she became a member of Greater Saint Paul Church and transferred her studies to Dunbar High School. After graduating from Dunbar class of 1969 where she met Spencer Sanders, they married and from this union two children were born, Walter Earl and Carla Louise Sanders. A hard working mom and a fierce friend she loved to go out and have a good time and balanced her family life well. She later remarried Howard Williams. Louise worked at Tandy, Tracor Westronics, and Ben Hogan. After retirement from Ben Hogan resulting from an injury, she spent her days caring for her children and grandchildren and loving on her great-grandchildren. The simple pleasures in life and brought her joy. Some of her favorite hobbies were to dance, listen to music, play cards or dominos, watch soap operas and game shows on television and go to bingo! Most weekends were spent playing cards with her close friends or driving out to Winstar. Her personality was contagious although she was set in her ways she was a joy to everyone that she met. She was preceded in death by her husband Howard Williams . Louise is survived by her sister Saundra Boone, her brothers Walter Boone Jr., and Ronald King, her son Walter Earl Sanders, her daughter Carla Walter(Warden), her grandchildren Tamara Sanders, Chris Martin, Kobe Walter, and Asia Jones (Brandon), her great grandchildren Raigen, Charleigh, Braedon, Zoë, Beau, Kamren and a host of other relatives and friends.

Louise &#8220;Sissy/Blu" Williams was a caring and deeply loved mom, sister, grandmother, great grandmother, and friend. After courageous battle for years with her heart she left this world on May 18, 2021 at the spectacular age of 70. She was... View Obituary & Service Information

The family of Mrs. Louise Lanata Williams created this Life Tributes page to make it easy to share your memories.

Louise “Sissy/Blu&quot; Williams was a caring and deeply loved mom,...

Send flowers to the Williams family.