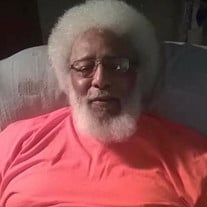 Mr. Johnnie Bankhead, age 76, passed away peacefully on February 2, 2021 at Texas Health Harris Methodist Hospital in Fort Worth, Texas. Johnnie was born April 20, 1944 in Waukegan, IL, the eldest surviving son of Albert "Bud" Bankhead Jr. and Henrietta Bankhead-Johnson.  In 1953 when Johnnie was 9 years old, he was acknowledged in the Waukegan News Sun for rescuing 4 of his sisters and 1 brother from a fire in a home 23 residents on Market St. Years later on August 12, 1958, he was presented with a certificate by the Waukegan-North Chicago Chamber of Commerce for his heroic efforts.     Sometime later, Johnnie moved to Racine, Wisconsin with his mother and other siblings. With only a 9th grade education in hand, Johnnie enlisted in the U.S. Army from 8/11/1961 - 4/2/1963 where he served in Germany and was honorably discharged.  Johnnie entered into union with Annie Ruth King on November 27, 1965 in which the 2 had 3 children; Carolyn "Bonnie" Bankhead of Fort Worth, Texas; Carla Velasquez of Great Lakes, Il; and Janet (Louis) Johnson of Fort Worth, Texas. In 1969, Johnnie received his GED and from then on, his main interest was school and receiving higher education. He was constantly reading. He studied and received his Associates Degree in Electrical & Radio repair at Gateway Technical College in Kenosha, Wisconsin, where he was also a radio personality on Gateway's own radio station.   In Kenosha, while working 2 or 3 jobs at a time as well as being an avid student, his main employment was with American Motors. At American Motors, he was a Union Steward. He was also one of the 1st representives of the Black Coalition in Kenosha. He was a weightlifting trainer at the Christian Youth Center (CYC).  From working on the production line in Kenosha, Johnnie moved to Seattle, Washington where he began working for Ford Motor Company on the production line and held several other positions ending his career in Information Security. Johnnie was very passionate about furthering his education and during his off time, received certifications in computers (building and repairing), Income Taxes (where he volunteered for VITA-Volunteer Income Tax Assistance for the elderly, disabled and persons with low income), Real Estate, as well as refereeing for the Seattle Center's Sports venues. Johnnie holds lifetime membership with the National Grand Orient of the A.& A.S.R. Masons and O.E.S. National Charity and Relief Department and the American Legion, Rago-Christopher Post 165 in California. Later in life, Johnnie met and married Shirley Bankhead in Vacaville, California. Johnnie is survived by his 3 daughters, 8 grandchildren: Andre Sanchez, Mario(Amanda) Little, Angelique Montgomery, Markus Little, Clintin Montgomery, Jr., Marlee Little, Jaquan Bankhead and Savontaye Bankhead; 18 great-grandchildren; 2 sisters: Joan Dobbins and Josephine(Ronnie) Davis and 2 brothers: Jessie Bankhead and Terry Bankhead. He was preceded in death by Albert "Bud" Bankhead Jr. (Father), Henrietta Bankhead-Johnson (Mother), Shirley Bankhead (Spouse) brothers: Albert, Joseph, Kenny Wayne and Frank Bankhead; sisters: Henrietta "Gert" Mason. Betty Ann Farley, Dorothy "Doris" Foster, Diana Chapman, and Patricia Bankhead.   Services for Mr. Johnnie Bankhead will be held on Saturday, February 20, 2021, at 11:00 AM at The Mae J. Boyd Memorial Chapel with Adriane Woods officiating. Burial will be held on Monday, February 22, 2021at 09:30 AM at DFW National Cemetery in Dallas, Texas.  .

The family of Mr. Johnnie Randell Bankhead created this Life Tributes page to make it easy to share your memories.

Send flowers to the Bankhead family.