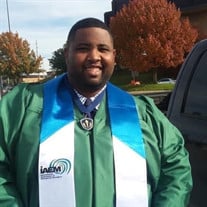 Jason Jovan Womack Sr. was born on October 18, 1979 in New Orleans, Louisiana. He was the loving son of Gail Young and the late Darryl F. Womack Sr. And the beloved Stepson of Solomon Murray. As a kid Jason was always active and fun loving with family. He was the type to make you mad, make you laugh, and fight for you in the same day. Growing up he loved karate and old western movies. This is the reason he was always a protector and well respected amongst family and friends. Jason’s foundation of faith was established at an early age. He was baptized at New Creation Baptist Church by Rev. Cornin. He served as a junior deacon at Lower Light Baptist Church. He remained a faithful member as an adult until he relocated to Texas after Hurricane Katrina. Jason graduated from Fredrick Douglas High School in 1997. He immediately enlisted into the military. Where he served in the Marine Corps, there he developed his love for traveling and building combat tools. After being honorably discharged from his services, Jason returned home and was introduced to fatherhood with his oldest daughter Jayla being born August 7, 2000. Soon after he married his fiancé and high school sweetheart, his best friend Tinisha Anika Bridges on August 27, 2000. Now facing the world as a man with a family, Jason began adding value to himself by becoming a state police, Licensed Electrician, CDL certification, and finally, his Bachelor’s Degree in Disaster Management from the University of North Texas. Jason was goal oriented and focused on setting an example for his family. He was currently enrolled in UNT again to obtain his master’s degree. His perseverance to succeed was exemplified through his relentless pursuit to constantly secure a bright future for his family. Jason was happily employed by the Federal Emergency Management Agency where he worked at until he took his rest. Jason loved his coworkers and would often joke with them about all subjects from family to recreation. He could hold a conversation with anybody about everything. Jason had a smile that warmed any room. A gentle giant who left an impression in everyone’s heart. Jason was a wonderful and dedicated father. Everyone knew that he was overprotective of his children. His life was centered around spoiling them. Jason was the amazing father of Jayla, Heaven, Jason Jr., Jayden, and Jaxson. When you saw Jason you saw his children. The kids were lovingly coined as “Jason’s kids” and “dem Womack kids.” They thought the world of him and he gave them the world. He was loved and spoiled his Godchildren, Joenaria Miller, Eric Brister, and Jada Love. Jason’s memory will forever live in his beautiful and humble wife of 20 years, Tinisha. His loving mother and stepfather Solomon and Gail Murray. Jason has been split five ways and embedded in the souls of his five children Jayla, Heaven, Jason Jr., Jayden, and Jaxson (the teenage toddler). He will forever protect his brothers Glen Murray (Jennifer), Daryl and Christopher Womack and his sisters Sydni Hodges (Milton) and Alonia Robinson Singleton (Darrel). Jason will be remembered by his sister in laws who he bossed and loved on, Latasha Tate (Keith), Sheena and Dwan Hughes, one brother-in-law Dwayne and his mother-in-law who answered the call for help whenever Team Womack needed it, Willianne Hughes. Our family was known as Team Womack and Jason lead as a dedicated captain until the day he gained his wings. Jason enjoyed his role as a big brother to so many who affectionately called him Jay or Big Jay. He will be forever remembered by a host of aunts, uncles, nieces, nephews, cousins, family and friends. Jason made a lasting impression on everyone who knew him. There is an everlasting bond between him and his cousin Shaun Hewitt, his friends Joe Nathan Miller and Manuel Thibodeaux. Jason was preceded in death by his father Daryl F. Womack Sr and both his maternal and paternal grandparents.

Jason Jovan Womack Sr. was born on October 18, 1979 in New Orleans, Louisiana. He was the loving son of Gail Young and the late Darryl F. Womack Sr. And the beloved Stepson of Solomon Murray. As a kid Jason was always active and fun loving with... View Obituary & Service Information

The family of Mr. Jason Jovan Womack, Sr. created this Life Tributes page to make it easy to share your memories.

Send flowers to the Womack family.