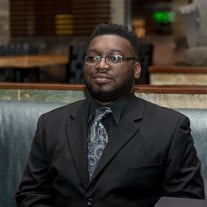 James Clayton Blackwell was born in Fort Hood, Texas on November 13, 1988 to John and Sonia Blackwell From the time of his birth until his last breath, James fought to live life to the fullest The doctor was not expecting James to make it through the night after taking his first breath, not only did he survive, he had to be moved out of NCU, due to causing havoc to their equipment he kept pulling it apart. After James was released from the hospital he was laid hands on and prayed for by Bishop Nathaniel Holcomb A month later James was dedicated and given back to the Lord in the presence of family and friends in Pine Bluff, Arkansas by Dr Kerry Price James lived to love God, his brother, father and take care of his mother. As long as James was with his mother and family he was full of joy. James gave his life to the Lord at a the very tender age of 4 years old, after convincing his mother he knew what he was doing; during a revival his mother was ministering in Texarkana, Texas. He served God faithfully at his home church under the watchful eye of Dr. Louise J Lyas in Pine Bluff, Arkansas. After the family moved to Texas he served in excellence and with passion under the with his mother. He has served God from that day he made his confession of faith, until he opened his eyes in glory. James loved all things media, sound, technology oriented, he was a perfectionist regarding the ministry of audio and sound. He would always tell his mother, "it does no good for preachers to preach , if no one can understand what they are saying". James loved supporting and working with his mother in ministry and life." March 1992 James became a big brother and met his best friend for life. He wanted to make sure his brother always knew he had his back. He wanted to be the best big brother in the world and became his brothers protector. From the time Joshua was born until the last breath in his body, he spent his life making sure his brother knew he was loved and he believed in him. They were champions together, graduated from college together, served in military , together, worked in ministry together, enjoyed life together. He was more than a brother, he was a friend." James leaves to cherish his memory father Elder John M Blackwell, his mother Apostle Sonia C Blackwell, his best friend and the other half of his being his brother Pastor Joshua C Blackwell, grandmother Dora J Terrell- Lewis; 11 Uncles- Reginald Gulley , Elder Patrick McClinton, Elder Emanuel Blackwell, Elder Thomas Blackwell, Pastor Raymond Blackwell, Charles Blackwell, Elder LeVan Blackwell, Elder Eddie Blackwell, Robert Blackwell, Alvin Blackwell, Superintendent Kenneth Blackwell. 3 Aunts- Pastor Mae Lois Fields(Blackwell), Crystal Clayton Burns, LaQuana Billingsley. God Parents Min. Mark & Laverne Suggs, God Brother Min. Derrick Pipkins, God sister Samaria Kelly . Host of Great-Aunts, Great- Uncles, cousins, family and friends."

James Clayton Blackwell was born in Fort Hood, Texas on November 13, 1988 to John and Sonia Blackwell From the time of his birth until his last breath, James fought to live life to the fullest The doctor was not expecting James to make it through... View Obituary & Service Information

The family of Mr. James Clayton Blackwell created this Life Tributes page to make it easy to share your memories.

Send flowers to the Blackwell family.