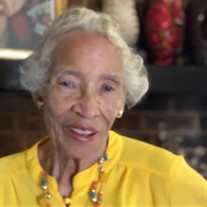 Her Life’s Story Imogene Caldwell, known lovingly as “Big Mama” was born in Coolidge, Texas to the parentage of Aaron Hernandez and Jewel Henderson. Imogene Caldwell dedicated her life to Christ at an early age and served in many capacities through her Christian walk. She served under Rev. C.R. Brown at Macedonia, followed by Rev. Milford Kelly at Mt. Rose Baptist Church, where she was then led to serve at Pilgrim Valley Missionary Baptist Church under the pilgrimage of the late Pastor W.G. Daniels and Pastor Maverick D. Gayden. She loved her roles as a Nurse’s Aid for the health awareness team, and her membership in Hands to Heart Ministry. The life of Imogene proves her service to the Lord. Her iconic strength in action has paved the way for many families in her community. The grace of her words holds love and gratitude within the family of her own. In 1950, Imogene was married to the late Burnett “Steve” Caldwell. She chose to pursue her education and career in social work. She attended Woodland High School and continued her education at Jarvis University and Tarrant County College in Fort Worth, Texas. During her studies, she had a commitment of advancing others, combat inequality and injustice; within her lifetime and generations to come. She was known to all as “Big Mama”. She dedicated her life to the care of younger generations. Her abundance of love allowed others to have comfort in her abilities, resulting in the best child-care for children at every developmental level. Big Mama did not stop there, with her entrepreneurial spirit; she became the first African American Women to have ownership of her own childcare facility in the area. She was the owner and managed “Love and Care Daycare” and also Love and Care Wonderland” for over 40 years. The expansion and success of her business not only led to employment opportunities without our community, but also served as the second home to an overwhelming number of children in Fort Worth. Even then, she witnessed firsthand, the discrimination in the allocation of funding for African American businesses. Through her pursuit of justice, she was a well know figure who helped successfully change the terms of government funding for minority owned businesses in Fort Worth. She is preceded in death by her husband, Burnett “Steve” Caldwell; Her father, Aaron Hernandez; Her mother, Jewel Henderson; Her children, Lois D. James, Riley Wayne Caldwell as well 3 grandchildren and 1 great grandchild. Her Legacy continues through her children, Vickie Briggs, Belva “Jody” Caldwell, and Patricia “Pat” Brigham; 6 grandchildren, 20 great-grandchildren, and 6 great-great grandchildren; Special friend over 60 years, Maydella and Alfred Wimbrey; and a host of other relatives and friends.

The family of Ms. Imogene "Big Mama" Caldwell created this Life Tributes page to make it easy to share your memories.

Send flowers to the Caldwell family.