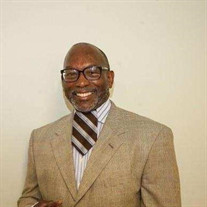 Gregory Eugene Stafford, affectionately known as “The Gorgeous One”, was born January 12th, 1964 in Fort Worth, Texas to William T. Stafford and Viola J. Stafford. Growing up in the Lake Como, Texas community, Gregory was educated in the Fort Worth I.S.D. school system. At the age of nine, Gregory accepted Jesus Christ as his Lord and Savior, uniting with Como First Missionary Baptist Church on August 22, 1973 under the pastoral leadership of Rev. H.D. Steptoe. He was active in Sunday School, the Youth Choir and the Royal Ambassadors (RA) Boys with Sis. Jessie Washington as his teacher. He also played Little League Baseball and boxed at the Golden Gloves in Fort Worth, Texas. During the early 1990’s, he was associated with the Nation of Islam and was a practicing Muslim under the teachings of the Honorable Minister Louis Farrakhan. By the late 1990’s he returned to his Christian roots joining Friendship-West Baptist Church under the leadership of Dr. Rev. Frederick Douglass Haynes, III and served on several ministries throughout the church, including being one of the original members of “The Men of Judah” dance ministry. After leaving Friendship-West, he made Disciple Central Community Church (DC3) under the pastoral leadership of Pastor Marcus D. King his church home. Gregory graduated from Arlington Heights High School in 1982. While attending Grambling University, an HBCU with one of the baddest bands in the land, he adopted his alias “The Gorgeous One “. During his sophomore year at Grambling University, Gregory decided to join the Navy, serving our country from 1984 to 1988. He later earned his Associate of Science degree from Tarrant County College. After leaving the military in 1988, he began working at the Post Office until his untimely death. With his outgoing personality he preferred walking routes rather than driving so he could be amongst the people. Those he served loved his upbeat energy and jokester personality. Gregory advocated for social justice issues attending marches and rallies, including the infamous Million Man March in Washington, D.C. He often ministered to the homeless, feed the hungry and gave toys to those who were less fortunate through Toys 4 Tots at Christmas time. He was an exercise enthusiast, an avid cyclists competing in numerous competitions and triathlons, winning medals for his age group and always excited to share his medals with his mom, whom he loved and adored with every fiber of his being. Gregory loved the Lord, his family and felt strongly about his community. He enjoyed people and treated everyone with courtesy and respect. “The Gorgeous One” will be remembered by family, friends and those who knew him as a fun-loving active member of his church and community. He was admired by all he came into contact with mastering the skill of the Social Butterfly. He was well-traveled, a food connoisseur, witty, raunchy, loving, opinionated, self proclaimed master of all, the life of the party, center of attention, and if you asked him the “biggest ladies man” on this side of the Mississippi. Gregory was preceded in eternal rest by his father Mr. William T. Stafford, sisters Angela Fussell and Phyllis L. Stafford, brother William M. Stafford. Left to cherish his memories are his mother Mrs. Viola J. Stafford; brother Reginald D. Stafford, Sr.; sister Carla Miles (Eric); nieces Angel Fussell, Andrea Fussell, Erica Miles,and Cyera Miles; nephews Reginald D. Stafford, II (Corlinda), William M. Stafford-Fennell, Ryan J. Boyd (Brittanie), Monteze Miles (Shay), and Eric Miles, Jr.; favorite cousins Mischel Sims (Jimmy) and Evan “Evan Earl-Doc Strings” Sims, five great nephews and five great nieces. Special Friends: Javaun Price (Jackson), Tommie Thompson, Denora Daniels (Albury), Donna Creer, and Chrystal Edwards along with a host of aunts, uncles, cousins, and friends.

Gregory Eugene Stafford, affectionately known as &#8220;The Gorgeous One&#8221;, was born January 12th, 1964 in Fort Worth, Texas to William T. Stafford and Viola J. Stafford. Growing up in the Lake Como, Texas community, Gregory was educated... View Obituary & Service Information

The family of Mr. Gregory Eugene Stafford created this Life Tributes page to make it easy to share your memories.

Send flowers to the Stafford family.