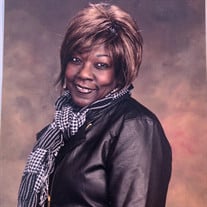 Gloria Joyce Avery Hawkins was born February 26, 1951 to the late Booker T Avery Jr. and Lucy M Moore Avery in Dallas, Texas. Gloria was the second of three siblings. Her older sister, Dessie, and her younger brother Larry, preceded her in death. Her family moved to Oklahoma City, OK at an early age. Gloria grew up and was baptized in the Mt Carmel Baptist Church of Oklahoma City. She was a member of Mt. Carmel and later joined the Paradise Baptist Church of Oklahoma City and the New Life Baptist Church. Gloria attended the Oklahoma City public schools and graduated from Douglas High School in May, 1969. She completed additional studies at Central State University of Edmond, OK. Gloria and some of her friends organized a religious singing group while a member of the Mt Carmel Church. The group released albums that were greatly accepted by the public. She was known statewide for alto/tenor voice. In 1969, she met Eddie J. Hawkins, Jr. and in October, 1970, they were married at Mt Carmel Baptist Church. In May of 1973, they welcomed their son, Marcus Dion, and in 1976, they welcomed their daughter, Mychelle Denea (Lovie). Gloria also cared deeply for her niece LaShanta Avery, (deceased), and nephew, Dwayne Avery. After graduation from High School, Gloria entered the Dental Assistant program at the University of Oklahoma Hospital. She was later employed by Tinker Air Force Base for a short time, then she accepted employment by the Department of the Treasury, (IRS). In a short time frame, she was promoted to Teller Supervisor. Job opportunities required, the family to move to DeSoto, Texas in 1991. Gloria continued her employment with the Internal Revenue Service as a Bankruptcy Technician. The family united with the Friendship West Baptist Church where she continued to serve in a myriad of the Church’s ministry. She was a member of the Order of Eastern Star and served in top leadership positions. Gloria was an entrepreneur and masterful seamstress. She started a business “Seams Like Yesterday”, where she made and sold many creations. Her hobbies included going to the casino (alot), sewing, bowling, playing cards, especially bid wiz, and dancing. She loved people and they loved her! Gloria retired from the IRS in December of 2018. Gloria’s memory will be cared for beyond measure and cherished in the hearts of all her family, friends, and all who knew her. Gloria’s survivors include her mother Mrs. Lucy Aston, Oklahoma City, OK; Marcus Hawkins & spouse Michele. Their children Dion, Donovan, & Peyton of Mansfield,TX; M. Lovie Baxter & spouse Roderick Sr. Their children Alexandria, Carrington, Tyler Hawkins, Sasha Renea, Roderick Jr., & Zoe-Simone of Bedford, TX; Dwayne Avery & spouse Jodi. Their children Tatum, Grayson of Moore,OK; A very special friend, Robert Clark, of Fort Worth,TX; A host of relatives, friends,co-workers, and religious believers.

The family of Ms. Gloria Joyce Hawkins created this Life Tributes page to make it easy to share your memories.

Send flowers to the Hawkins family.