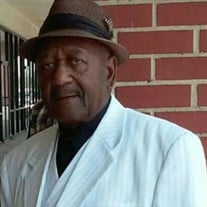 On December 04th, 1938 in Marshall, Texas, God blessed Emmitt Anderson Sr. and Arthuree Hunter with the birth of a handsome baby boy, whom they named Emmitt Anderson Jr. Emmitt was employed as a contractor and later in life answered his calling... View Obituary & Service Information

The family of Mr. Emmitt Anderson Jr. created this Life Tributes page to make it easy to share your memories.

Send flowers to the Anderson family.