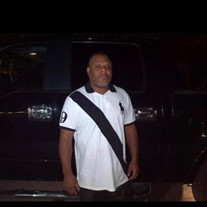 The Life Story of Our Beloved Elston Dewayne Howard "Wayne" On August 21st, 1966, Roy Lee and Mary Ann were blessed with the birth of Elston Dewayne Howard, in Fort Worth, Texas. He received his formal education from the Fort Worth Independent School District and Arlington Independent School District. He went on to graduate from Arlington Heights High School. He attended Prairie View A&M University where he later received his bachelor’s degree from Sam Houston University, Huntsville, Texas. Elston also pledged Omega Psi Phi while attending college. He met Sonya Wyatt in 1986 working at the Jack-in-The-Box, where out of this union they birth two beautiful daughters. In 1988 he reunited with a childhood friend and out of this union he birth a beautiful daughter. Elston worked as a parole officer and then work for the federal prison system. In 1992 he met Renee and later the union was sealed on January 27, 2001, out of this union they birth three boys. Elston was a long-time employee of BNSF Railroad. He was also a member of the Masonic Family and apart of the brotherhood Sigma Rhomeo. On May 24th, 2020 at 4:55 am, Elston heard his name called by the Lord. Elston transitioned from his earthly home to see the King. He was preceded in death by his Father Roy Lee Howard, mother, Mary Ann Person, brother, Ronald Howard, Jerroll Howard, and a host of uncles, aunts, and cousins. He leaves to cherish his memories, his wife Renee Howard, daughters; Erica Howard, Brittany Howard, Sabrina Deckard, sons; Khalil Shephard, Jaylen Howard, Jav’an Howard, Kaleb Howard; sisters, Sharon Castle, Danielle Howard, Dana Howard. Grandchildren; Davion Wilson, Preston Rodriguez, Justin Hatton Jr., Jaida Hatton. Khloe Shepard. A special friend Dee Johnson. A host of cousins, nieces, nephews, and friends. He will forever be in our hearts and dearly missed.

The family of Mr. Elston Dewayne Howard created this Life Tributes page to make it easy to share your memories.

The Life Story of Our Beloved
Elston Dewayne Howard
&quot;Wayne&quot;

Send flowers to the Howard family.