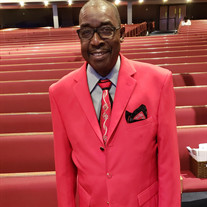 Earnese Lee Crater Sr was born in Altheimer, Arkansas on November 9, 1950. He was born to Eddie Crater Sr and Elizabeth Crater, and out of eleven children, Earnese was the 10th born. In addition to his parents, the following siblings have preceded him: Dorothy Crater, Eddie Crater (Beatrice), L.C. Crater (Lula Mae), Vernestine Haynes, Ollie Mae Parks (Robert), Willie B Crater, Ailene Gandy (Sam), and Charles Crater (Zilliah). On September 16, 1972, Earnese married Barbara Ann Johnson and from that union were two children: Felicia and Earnese II. Earnese was affectionately known to most as Poppa, Pop, G-Daddy, Dade-o, Elder, Prophet, Pastor, Brother, and to his wife, he was known as her Boo. Earnese accepted Jesus Christ as his personal savior at a young age, and he was a fine example of a Christian husband and father. Earnese worked for the State of Michigan for twenty years, fifteen of which he worked for the prison system, and five of which he worked for the Department of Social Services. Earnese was loved and respected by inmates, peers, and management alike. Earnese had many roles and wore many hats while serving at Faith Temple in Jackson, MI. He operated as Head Deacon, Youth Pastor, armor-bearer, Head of the finance committee, and spiritual counselor, just to name a few. In 2004, Earnese and Barbara moved from Jackson, Michigan to Fort Worth, Texas, where he served with Barbara at The Potter’s House of Dallas. While there, Earnese faithfully served with the T.O.R.I Prison Ministry, New Members Ministry, Keepers of the Sheep Ministry, First-time Visitors, and periodically he would stand in proxy for the Green Ministerial Team Leader. John 15:12 says, “This is my commandment, that ye love one another, as I have loved you.” Earnese loved the Lord and served Him faithfully throughout his life. Earnese had many dear and close friends too numerous to name. Earnese leaves behind precious memories and a legacy to be carried on by his wife of 47 years: Barbara Ann Crater; his children: Felicia Crater-Wright, Earnese Crater II and his wife, Ali Crater; his granddaughters: Armoni Crater, Jasmine Crater, and Kiley Wright; his siblings: Doris Jean Haliburton and her husband, Virgil Haliburton, Sylvia Louise Dozier and her husband, William Dozier, Helen Collins, and sister-in-love, Gerdie Crater (Willie B); in addition to many nieces and nephews.

Earnese Lee Crater Sr was born in Altheimer, Arkansas on November 9, 1950. He was born to Eddie Crater Sr and Elizabeth Crater, and out of eleven children, Earnese was the 10th born. In addition to his parents, the following siblings have preceded... View Obituary & Service Information

The family of Mr. Earnese Lee Crater created this Life Tributes page to make it easy to share your memories.

Send flowers to the Crater family.