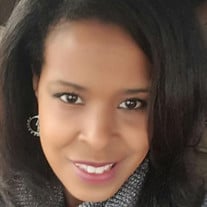 Deanna Marie Wilson Keahey was born on July 13, 1967, in Flint, Michigan. She transitioned to eternity with her Lord on February 28, 2019, at age 51. Deanna graduated from Flint Northern High School. She went on to receive her Bachelor of Science Degree in Early Childhood Education from Grambling State University. A lifelong learner who was always delighted to grow in knowledge, she later earned her Master's in Education from Concordia University. Deanna married the love of her life, Eugene Baron Keahey. The two remained united in love until they passed away together with their youngest daughter, Camryn Felice Keahey. Deanna had a passion for touching lives, especially the lives of young people. She pursued a career in education and enjoyed working as an elementary teacher through Dallas Independent School District and Cedar Hill Independent School District. Deanna was a member of Mt. Zion Baptist Church of Sandbranch where she served as First Lady and taught Bible Study. Alongside her husband, she labored to impact the Sandbranch and Dallas communities and truly enjoyed service to all mankind. She was also a member of Alpha Kappa Alpha Sorority, Inc., the first Greek-lettered sorority established by and for African-American college-educated women that has evolved into an international service organization. While attending Grambling State University, Deanna pledged her life to the Alpha Theta chapter of Alpha Kappa Alpha Sorority Incorporated in the fall of 1991. Upon moving to Dallas, she along with other sorors chartered the Upsilon Lambda Omega graduate chapter of DeSoto, Texas. Deanna was preceded in death by her parents, Ernest Wilson and Willie Bell Ross Wilson; and son, Justin Baron Keahey. Those left to cherish precious memories and continue her legacy of love for God and service to all mankind include her children: Bradley Keahey, Lauryn Keahey, and Darryn Keahey; sister, Janelle Stone-Williams and her husband, Derrick; sister, Linda Wilson; sister, Lois Butler and her husband, Travis; the Mt. Zion Baptist Church of Sandbranch family; and a host of other relatives and friends.

Deanna Marie Wilson Keahey was born on July 13, 1967, in Flint, Michigan. She transitioned to eternity with her Lord on February 28, 2019, at age 51. Deanna graduated from Flint Northern High School. She went on to receive her Bachelor of Science... View Obituary & Service Information

The family of Mrs. Deanna Marie Keahey created this Life Tributes page to make it easy to share your memories.

Send flowers to the Keahey family.