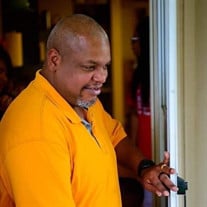 Darrick Dee Crump departed this life on November 21, 2019 at the age of 47. The cause of death is undetermined as of the time of this writing. Darrick was found by neighbors collapsed in his front yard in Grand Prairie, Texas and called 911. The paramedics who responded found his heart had stopped beating and neither they nor the emergency room doctors could jumpstart Darrick’s heart and he was announced dead on arrival. People are told often in sports and the military to give out but never to give in. Somewhere in his life Darrick must have heard those words for he worked very hard to care for the family he loved and to buy them a house of their own. He worked for many years at Walmart and then Kroger, the latter of which he left due to injury and illness. Yet despite his disability and reduced income, Darrick continued to strive toward his goal of home ownership. He tried to get work even while disabled but no employer would take a chance on his disabilities. Thus, as the holidays approached, Darrick sat out in his front yard and dreamed the dream he had dreamed for over a thousand times – he dreamed of home ownership. Yet, as T.S. Eliot reminds us, “Humankind cannot bear reality very much.” In the end, caught between his dream and his reality, Darrick’s heart could not bear the weight of Darrick’s reality and gave out. Most of those who loved and cared about Darrick were never aware of this internal struggle. For always Darrick had a smile on his face and made people laugh with his many stories and jokes. He was kind and generous and helped others even when he did not receive the help, he needed to make his dream come true. But above all else, Darrick loved and cared for his family. When last this author spoke with him, Darrick was at Jack-in-the-Box with his daughter Jessica. Now that is a life well lived. Darrick’s father Franklin “Sugar Man” Crump predeceased him. Darrick leaves behind a loving wife – Juliana, and three children: Jessica, Christian and Michelle, the later of whom is his stepdaughter, but Darrick loved and accepted her as his own daughter as well as two grandchildren Itzel Muro and Aleyza Muro. Darrick is survived by his

Darrick Dee Crump departed this life on November 21, 2019 at the age of 47. The cause of death is undetermined as of the time of this writing. Darrick was found by neighbors collapsed in his front yard in Grand Prairie, Texas and called 911.... View Obituary & Service Information

The family of Mr. Darrick Dee Crump created this Life Tributes page to make it easy to share your memories.

Send flowers to the Crump family.