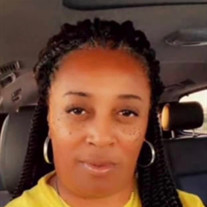 The Life Story of Cynthia F. Guillory On September 05th, 1967 in Fort Worth, Texas Bobby and Vera welcomed a beautiful baby girl into this life. They name her Cynthia Felicia Guillory. At an early age she accepted Jesus Christ as her Lord and Savior, she joined First Saint John Cathedral under the leadership of the late Rev. L. B. Moss and later Bishop Kenneth B. Spears became her pastor. Cynthia attended Paul Lawrence Dunbar High School and was a part of the Dunbar Marching Band, the track team, and basketball team. Graduating in the class of 1986. That same year Cynthia gave birth to her only son, Victor Guillory and her journey as mother and mentor and her love for young people and the game of basketball spread to many young athletes who’s lives, she impacted through her youth sports organization that started in the early 90s. Cynthia coached the 12 and under girls’ team for the Fort Worth Outlaws. The organization later expanded and became Team Fort Worth where the teams traveled throughout the United States. She then founded National Regional sports and held basketball tournaments through Texas, Kansas and Oklahoma regions. In 2006 she later founded CMD Sports Group and Consultants and “What’s UR Sports Apparel”, where she mentored couches and directors, and helped to start their own sport organizations. Cynthia camps and Allstar girls’ tournaments expanded as far as the West Cost. Becoming a known and trusted voice in the youth sports community. Cynthia later started her own radio show “The Mind Set”, where whatever her topic was her listeners needed to get their minds ready! She always ended each show with her famous words “I Holla”. On August 16th, 2021, Cynthia answered the masters call and peacefully transitioned from time to eternity. When she arrived, she was greeted by her grandfather Victor Guillory, her grandmother Hattie Mae Guillory, her father Bobby Anderson, and aunts Victoria Smith and Gloria Johnson. Cynthia leaves to cherish her wonderful memories, mother Vera Price, sister Celestyal Price, brother Vonzell Thomas (Angela), son Victor Guillory, grandson Victor Guillory Jr., her wonderful caregivers Erica Hines and Tiffany Lee, and a host of other relative and friends who loved her dearly.

The Life Story of Cynthia F. Guillory On September 05th, 1967 in Fort Worth, Texas Bobby and Vera welcomed a beautiful baby girl into this life. They name her Cynthia Felicia Guillory. At an early age she accepted Jesus Christ as her Lord... View Obituary & Service Information

The family of Ms Cynthia Felicia Guillory created this Life Tributes page to make it easy to share your memories.

Send flowers to the Guillory family.