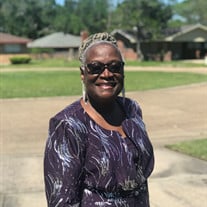 The Life of Mrs. Carol Jean Brown- Norman Carol entered this life March 12, 1946 in Lincoln, Nebraska; at the tender age of 3 she was adopted and raised in Cheyenne, Wyoming by her adopted parents Theodore & Irene Brown. Carol was the youngest of 4 siblings. After graduating from Central High School, Carol;  met and married her first husband Walter Weiss in 1964, then moved to Baton Rouge, La. From this union 2 children were born, Walter Weiss Jr, and Kim Clay. The marriage dissolved after 7 years.  Carol furthered her education at Baton Rouge Vocational School where she received her degree in accounts payable which she began her career with BASF in Geismar, La. Her career span lasted from 1970-2005. Carol was the First black women employed with the company. Carol accepted Christ as a young girl. She was blessed with many gifts and talents which included playing the piano, organ (by ear), cello and singing in church at an early age. Her gifts lead her to receive many awards including recording an album as a teenager. Carol's love of playing and teaching music continued until retirement. Her love of music allowed her to play at several churches throughout her lifetime which included St. Philip BC in Modest, LA, and Little Zoin Baptist Church in Baton Rouge, LA.  In the late 70’s she formed a gospel choir called “The Weiss Gospel Ensemble”. In the early 80’s she began volunteering at the Louisiana Correctional Institution for Women in Saint Gabriel which lasted over 30 years. Carol was also an instructor at the Christian Bible School in Baton Rouge, LA.  Carol was able to encourage & influence those who were incarcerated. She had the gift of enhancing the Choir and forming a Praise Dance Team, under her vision and leadership. The ladies traveled and ministered throughout Southern Louisiana. Now this was a true passion for Carol.  January 14, 1990 Carol married Edgar Norman Jr., whom she lovingly called “Honey Darling”. They cooked, entertained, and travel together, which included cruises to several Caribbean Islands and 3 trips to Africa. The love they shared was an inspiration which continued until the Lord called her home. Some called them “The Love Birds”. Carol was an active member of New Zion Baptist Church for over 30 years, a licensed Evangelist, sung in the Choir and played the organ as needed. Carol was strong in her word, and loved to hear her Pastor, Rev. Green teach the Word, especially the Greek Word. She and Edgar hardly missed a Sunday or Bible study. Her favorite quote was “Trust God”. Carol will be missed by her loving husband Edgar Norman, Jr., son Walter Roy Weiss Jr, daughter, Kimberly Reneé Clay (Joseph), stepchildren, Ronnie Norman (Rene), Cassandra King (Todd), 2 grandsons, Bakari Weiss (Alana), Eddie Christmas, Jr., 3 great grandchildren, host of nieces, nephews, and friends. Carol was proceeded in death by her parents, 3 siblings , and Stepdaughter Janice Kaye Brandon. Those who knew Carol, knew she remained strong as she battled breast cancer for 8 years. She never lost her loving spirit and touched many lives until God called her home. Carol & Edgar came to live with Kim & Joseph in Texas October 2020 until God said, “Well Done, thy Good and Faithful Servant”. We trust God who is all knowing and almighty to give us strength & peace as we lay to rest our wife mother, grandmother, aunt and friend

The Life of Mrs. Carol Jean Brown- Norman Carol entered this life March 12, 1946 in Lincoln, Nebraska; at the tender age of 3 she was adopted and raised in Cheyenne, Wyoming by her adopted parents Theodore & Irene Brown. Carol was the youngest... View Obituary & Service Information

The family of Mrs. Carol Jean Brown-Norman created this Life Tributes page to make it easy to share your memories.

Send flowers to the Brown-Norman family.