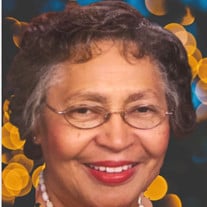 On March 21, 1937, in Louisville, Kentucky, in the midst of The Great Flood, Mr. Robert W. Young and Mrs. Eva M. McCord Young welcomed their second child, a beautiful baby girl whom they named, Anna Mae Francis Young. Anna was a creative child who loved to dance and play with dolls. She spent many hours laughing and riding bikes with her friends, especially Edwina Thompson. Anna accepted Jesus Christ as her personal Savior at West Chestnut Street Baptist Church in Louisville and was baptized in February, 1948. She regularly attended Sunday School, sang in the junior choir and served with the Brownie Scouts. In 1954, she graduated a year early from Central High School and then continued her education for one year at Nazareth College.  After attending Christmas Day service at her church in 1957, a young man named Thomas introduced himself to the shy belle. They had an exciting, whirlwind romance that landed them at the altar of God's love on December 30, 1958. Their life together was never dull. It was full of adventure with Thomas' military experiences, seminary, four parishes, residing in six states and seven cities. It encompassed everything true love embodies; deep love, commitment, ardency, forgiveness, and most of all devotion to Christ and to each other. Their union was blessed with five children: the Rev. Dr. Angela Fontessa (Atlanta, Ga.); Terence Whitney (Coral Springs, Fla.); Phillip Bryan (stillborn)’ Eugenia ”Genia” Marita (Grapevine, Texas); and Nathan Rahsaan (North Palm Beach, Fla.). They brought different sorts of adventures, but none they couldn't handle together. Anna was a superb mother who doted on her children and they in turned tried to make her proud. Eventually, Anna stepped into the role of mother-in-law to Deborah Williams Shepherd, Ed.D., wife of Terence, and Darral Keys, husband of Genia. Her role of grandmother to Athena Fontessa Richardson, Anthony Shepherd-Keys, Andrew Thomas Shepherd-Keys, Holly Maria Shepherd-Keys brought her great honor and joy. In addition to being a loving wife, mother, and friend to many, Anna faithfully served in many church-based roles: Sunday School teacher; altar guilds; she was a licensed Lay Eucharist Minister in Southeast Florida; member of the Daughters of the Holy Cross at St. Stephen's Hurst, Texas; a delegate several years to the annual Episcopal Churchwomen Convention in the Diocese of Kentucky; attended Crusillo; was an active member of Churchwomen United in South Florida; and the AARP Senior Citizens group in Bedford, Texas. She enjoyed working at several companies and institutions over the course of 35 years, including working as a CNP  in hospitals in Louisville, Ky., Memphis, Tenn., and Boca Raton, Fla; and was employed with Tube Turns Industries in Louisville, Ky., The University of the South Library in Sewanee, Tenn., Hamilton Middle School in Memphis, Tenn., and Walmart photo labs in Delray Beach, Fla. and Kansas City, Mo.  Anna loved nearly all kinds of music, especially jazz, classical and Broadway musicals. She was not a fan of the blues or country music. She enjoyed flowers and, gifted with a green thumb, had a sizable array of house plants. She was very creative, especially with arts and crafts, and made numerous door wreaths and decorations. She was a great dancer, loved cooking and was handy with a sewing machine. Anna was loved by many relatives including Leslie Young (Arlington, Va.), Lowell and Patricia Shepherd, (Prospect, Ky.), Warren and Pamela Shepherd (Lake Elsinore, Calif.), Regina Bourne (Independence, Ky.), Maxine and Deanea Mercer (Jackson, Tenn.), Michael Bourne (Irving, Texas); devoted friends Edwina Thompson, Velina Houston, both of Louisville, Ky, Randi and Don Swann, (Prospect. Ky.), and Julia Hennessey of Keller, Texas, and a faithful member of St Stephen's who has written weekly get-well greetings to Anna during the past seven years. She was indeed a helper, confidante and role model to the multitude of people she met during her travels and places of residences. Anna wanted everyone to remember her in this manner:  “God has been with me all the way. I have tended to be a very sensitive person, a devoted wife and loving and caring mother, grandmother and aunt. And, blessed to have met some wonderful people along the way.”

The family of Mrs. Anna Mae Franics Shepherd created this Life Tributes page to make it easy to share your memories.

Send flowers to the Shepherd family.